2015: October 15, Bernice’s ‘Mr. Bellini’ was awarded first place for a comedy writer by audience vote at the initial evening of “Comedy Quickies” at Whistler Writers’ Festival. 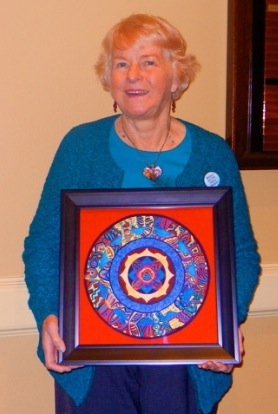 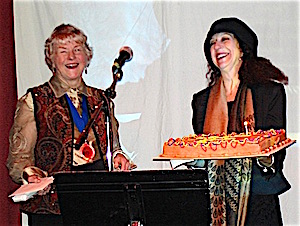 2015: February, at Cottage Bistro, Pandora’s Collective gave an evening of gifts, songs, poems, pictures and much praise for Bernice’s writing and support of other Vancouver area writers. (left)

2015: February 28, given the “Teaching and Learning Peace Award” by the International Peace Poets Society of Bellingham, WA, USA. This group is an ally of World Poetry Society in Vancouver, BC. Bernice Lever’s poems were also included in “Peace Poets” international anthology of 42 poets launched that day.(right)

2012: August, The Canadian Authors Association AWARD was presented to Bernice Lever in recognition of her 40 years of membership.

2009: February, awarded the title:  Lifetime Member by The Ontario Poetry  Society, with Canada wide members and an office in Toronto, Ontario.

2007: October 19 , Surrey International Writers Conference from Surrey Board of Trade: SPECIAL ACHIEVEMENT AWARD 2007 to Bernice Lever in recognition of your work as a writer and your significant contribution to the community of writers.

2004: June, The Allan Sangster Award for outstanding dedication and service to the Canadian Authors Association to Bernice Lever.

1993: May, Annual Arts Award for the Town of Richmond Hill, Ontario, for 25 years of volunteer service: mainly with Richvale Writers.

1980’s: WAVES, Fine Canadian Writing, magazine contributors won 3 National Magazine awards – 3 Firsts for Fiction, and 2 runner-ups for poetry in 5 years. Bernice Lever was an Editor and Publisher from 1972 to 1987.

Bernice Lever has been given several Prizes, Honorable Mentions and Short Listings of Winners from poetry contests over the decades, including the Wm. Henry Drummond Award, first prize in 2008.

One thought on “Awards”